We are pleased to announce the release of Bitcoin Core 0.15.0, which provides better fee estimates and more accessible fee bumping, initial support for multiple wallets in a single installation, and a number of significant performance improvements. Many bug fixes, optimizations, and other improvements are also included.

One of the performance optimizations in Bitcoin Core 0.15.0 is an update to the format of the database that tracks spendable bitcoins. The first time you start Bitcoin Core 0.15.0 (or a later version), it will automatically begin this update, which will take from about 5 minutes to 30 minutes depending on the speed of your computer.

If you later decide to downgrade to an earlier version of Bitcoin Core, please see the instructions in the release notes.

Evidence shows that users who are willing to wait just a few hours for their transactions to confirm can often save 80% or more in transaction fees over users who need rapid confirmation during periods of high demand.

Not only do these patient users save money, but they also help ensure Bitcoin miners always have plenty of fee-paying transactions to include in their blocks, which will be necessary to keep miners working on extending the Bitcoin block chain in the future as Bitcoin gets closer to the upper limit of 21 million bitcoins and transaction fees increasingly make up a greater share of miner income.

To help patient users get the best deal on transaction fees and rushed users get their transactions confirmed as quickly as possible, we’ve made several significant improvements to the built-in fee estimation algorithm and user interface in Bitcoin Core 0.15.0.

Programmers and command-line users automatically receive access to the improved fee estimation through their current RPC calls and can also use the new estimatesmartfee RPC to get access to the advanced features described above. Note that the older estimatefee RPC continues to work, but is now deprecated and will be removed in a subsequent release. For more information, run bitcoin-cli help estimatesmartfee and see the release notes.

In Bitcoin Core 0.15.0, this option is no longer just for experts. In the the fee options when sending a transaction using the graphical interface, users can now choose to “Request Replace-By-Fee”, allowing them to replace one version of an unconfirmed transaction with a later version that pays a higher fee. 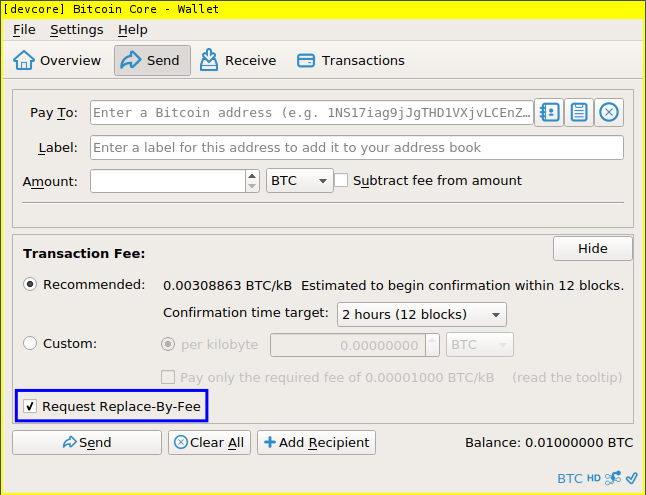 If users enable this feature on a transaction, they can later go to the Transactions tab, right-click on the transaction, and select the “Increase transaction fee” option. 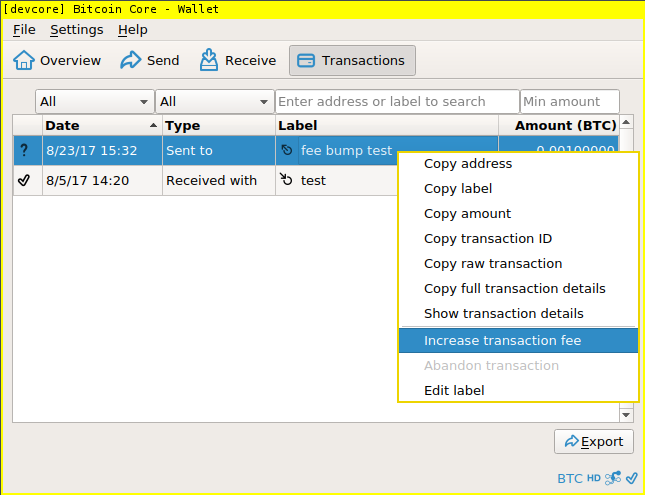 Users who want to request Replace-By-Fee (RBF) by default can start Bitcoin Core with the -walletrbf option or add walletrbf=1 to their configuration file. Note that some services that accept unconfirmed transactions as finalized payments may not accept replace-by-fee transactions as final until they confirm; for more information about opt-in replace by fee, please see the RBF FAQ.

In Bitcoin Core 0.15.0, a single running Bitcoin Core program can now manage multiple wallets with ease. This feature is still new and only accessible to expert users, but we hope to make it available in the graphical user interface in the future.

You can use the new multiwallet mode to,

These features are currently only available through the RPC interface for programmers and command-line users, and the API for them may change in future versions. Please see the bottom of this post for information about how to contribute to development if you’d like to help improve multiwallet mode and make it available in the graphical interface. For more information about multiwallet mode, please see the release notes.

As part of the continuing effort to make full nodes available to as many users as possible even as the block chain continues to grow in size and complexity, Bitcoin Core 0.15.0 includes several significant performance improvements.

More information on each of these improvements may be found in the release notes.

As final preparations are being made to release Bitcoin Core 0.15.0, segregated witness has activated on the Bitcoin network and is now ready to use.

Bitcoin Core has supported creating segwit addresses since 0.13.0, but this support was designed for testing has only been available to expert users—we were waiting to see if segwit was adopted before adding segwit support to the regular user interfaces, both graphical and RPC.

The timing of segwit lock in and activation meant that we had to choose between either delaying the planned release of 0.15.0 and all its features described above or shipping 0.15.0 without a user interface defaulting to segwit.

We decided to take the later option, but we’re also not going to wait the normal six months before the next major update. Instead, our next feature release will generate segwit-compatible addresses by default. This will be made available as soon as it has been written and thoroughly tested.

For those of you interested in technical details, our plan is to use P2SH-wrapped segwit addresses that are compatible with nearly all other wallets on the network. We may support sending to Bech32 native segwit addresses generated by other wallets, but the graphical user interface will probably not support generating Bech32 addresses itself until a subsequent release.

For details on all the changes made in Bitcoin Core 0.15.0, please read the release notes. To download, please visit the download page.

If you are interested in contributing to Bitcoin Core, please see our contributing page and the document How to contribute code to Bitcoin Core. If you don’t know where to get started or have any other questions, please stop by our IRC chatroom and we’ll do our best to help you.